The contents of Jesse Pinkman’s letter to young Brock Cantillo (Ian Posada) were never revealed in Breaking Bad‘s sequel film, El Camino, despite the original plan for the sequence. Aaron Paul reprised his Breaking Bad role as Jesse for the follow-up project to Vince Gilligan’s award-winning AMC drama. While central character Walter White (Bryan Cranston) met his demise in the original TV series, Jesse’s fate was left unknown until El Camino came to fruition. Much of the movie followed Jesse, tying up loose ends before finding a new chance at life. In doing so, he had to send a final farewell to Brock, the son of a past girlfriend, Andrea (Emily Rios).

El Camino picked right up from the scene that ended the Breaking Bad series finale. After being freed from the neo-Nazi compound after Walt’s ambush, Jesse hopped in Todd Alquist’s (Jesse Plemons) car and booked it out of there before the cops could arrive. He then spent time on the run while trying to acquire the correct amount of money needed for Ed Galbraith (Robert Forster), aka the Disappearer, to get him a new identity. Upon a few dangerous encounters, Jesse obtained the amount, resulting in a one-way trip to Alaska before officially becoming Mr. Driscoll.

Though Jesse didn’t spend much time bidding farewell to those back in Albuquerque, he did give Ed a letter to deliver to Brock. The young boy, of course, was involved in pivotal moments in Breaking Bad. Not only was Brock intentionally poisoned by Walt as a way to manipulate Jesse, but Todd also murdered the boy’s mother as a warning. What Jesse said in the letter wasn’t revealed in El Camino, but that wasn’t always the plan. In the early stages of the movie’s development, Jesse was meant to provide a voiceover, reading the his letter to Brock as the final sequence in Alaska played out. Instead, Gilligan cut that version of the ending. 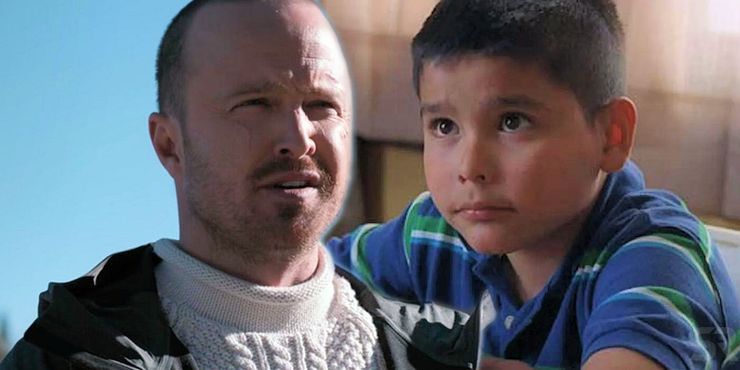 Based on Jesse’s connection to Brock, various conclusions regarding the letter could be drawn. He presumably would have apologized for failing to keep Brock and his mother safe. It’s possible Jesse also shared how much he meant to him before wishing that everything turned out differently. When Paul discussed what was in the letter (via EW), he replied that “it’s heartbreaking, it’s beautiful, just honest.” The actor also confirmed it was the first part of the script Gilligan completed when developing El Camino. As for why it was cut, Paul revealed Gilligan’s thinking of “maybe it’s best left unknown.” While he initially hoped Gilligan would change his mind, Paul later agreed with the decision.

Paul has since agreed never to share what was in Jesse’s letter to Brock, essentially adding more allure to the sequence. Taking care of Andrea and Brock nearly put Jesse on a new path before he was dragged back into Walt’s dealings. The boy was a sense of hope to Jesse, and that all came crashing down. The letter didn’t need to be read aloud to confirm the guilt he carried. It was evident Jesse would always be apologetic even after eliminating any chance of a reunion. Gilligan or Paul may decide to unveil the El Camino letter, but it could very well be a long-lasting Breaking Bad mystery, and that’s okay.

Breaking Bad: 10 Most Questionable Workplace Decisions In The Show