In Fear the Walking Dead season 6, episode 11, Teddy (John Glover) expressed a strong interest in finding Morgan Jones (Lennie James), a character he doesn’t seem to have any history with. This raises questions about why he would care about Morgan’s whereabouts.

Fear the Walking Dead season 6, episode 11, titled “The Holding”, sent Alicia (Alycia Debnam-Carey), Wes (Colby Hollman), Luciana (Danay Garcia), and Althea (Maggie Grace) to an underground facility to investigate the group behind the “The End is the Beginning” messages and the attack on Tank Town. They found out that the person behind it all is Teddy, played by Smallville’s John Glover. Teddy, who has somehow turned dozens of survivors into blind followers of his cause, has emerged as the show’s next big villain now that Virginia (Colby Minifie) is dead. He hasn’t explained the specifics of his scheme, but they do know that at the center of it is Morgan. Teddy tried to force Alicia’s group into giving up Morgan’s location, but to no avail.

Teddy’s reason for wanting Morgan is likely related to the mysterious key he obtained from the body of a bounty hunter named Emile. Emile had previously taken it from a man named Walter. It was believed that the key was connected to the submarine seen in the Fear the Walking Dead season 6 premiere. If the submarine is carrying a nuclear missile, that key could be what allows access to it. Teddy was wearing another one around his neck, which could suggest that the two keys are a pair that have to be used together. It’s been confirmed that the submarine has something to do with Teddy’s group, since they painted “The End is the Beginning” on it. If he wants to get the nuclear missile on the submarine, it makes sense that he’ll need the one Morgan is carrying. As for how he knows Morgan has it, it’s possible that Teddy’s people found out that Morgan killed Emile, who could have been hired by Teddy in the first place. It looks like Emile was supposed to bring Walter’s key to Teddy’s minions. 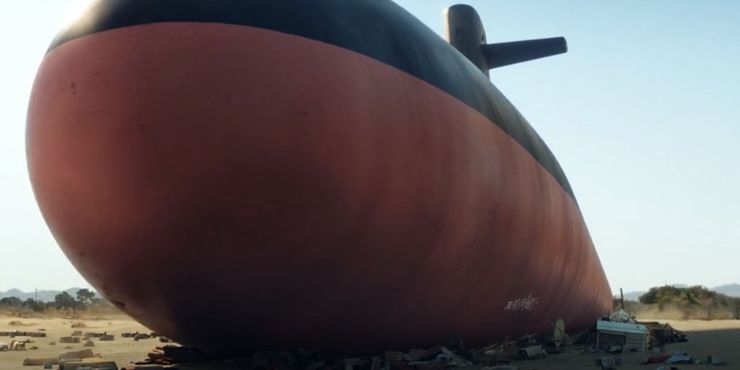 What Derek said to Wes earlier in the episode about what Teddy wants could provide the explanation for why Teddy may be after nuclear weapons like those on the submarine in Fear the Walking Dead. According to Derek, Teddy thinks everyone on the surface needs to be gone for things to reset and for the world to start over. Explosions at places like Tank Town obviously aren’t going to give him that, but the nuclear arsenal of a submarine could. That could be the reason why Derek said they’ve eventually shut down the Holding and have everyone stay there for good. It would certainly be the perfect shelter for them if they manage to wipe out all the people above ground with nuclear weapons. A plan of this magnitude fits well with Teddy’s “The End is the Beginning” mantra.

Right now, all signs are pointing to this being Teddy’s endgame, and if that really is the case, that would make Teddy the most ambitious and dangerous villain in the history of The Walking Dead universe. There have been plenty of characters in the zombie apocalypse looking to bring harms to others, but Fear the Walking Dead’s Teddy appears to be the first who wants to cleanse the world of everyone but his own people.

The Walking Dead: 5 Ways Negan Is Different In The Comics (& 5 Ways He’s The Same)

Walking Dead Season 11 Might Have a Rick Grimes Cameo