Released in 1970 and directed by Robert Altman, the film version is described as a satirical black comedy, and while taking place during the Korean War is really seen as an allegory for Vietnam (which was still raging on at that point). Among the film’s stars are Donald Sutherland as Hawkeye Pierce, Elliott Gould as Trapper John, Sally Kellerman as Major Margaret “Hot Lips” Houlihan, Robert Duvall as Frank Burns, Roger Bowen as Henry Blake, Rene Auberjonois as Father Mulcahy, and Gary Burghoff as Cpl. “Radar” O’Reilly (the only actor to make the transition over to the television series). Naturally, the focus is on the doctors and nurses stationed at a Mobile Army Surgical Hospital (MASH) in South Korea. 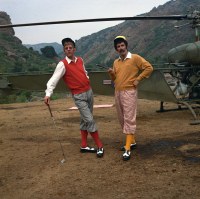 More on the Film

Muses Dale, “The novel was definitely written for an audience of adults, and it has some things in it that, had you come to it after watching the TV show, you’d be, like, ‘Who are these people? These people don’t act like the characters from the TV show.’ It’s obvious that when they took the novel and tried to make a movie, they were thinking, ‘Well, we’ve got to tone down some of the things that happened in the book.’ The book had some things in it that you couldn’t get away with in a movie back in the late ’60s. Same thing with the TV show. The TV creators were going, ‘Well, we can’t get away with some of the things that are in the movie,’ so they kept toning it down a little bit more as it went along.” 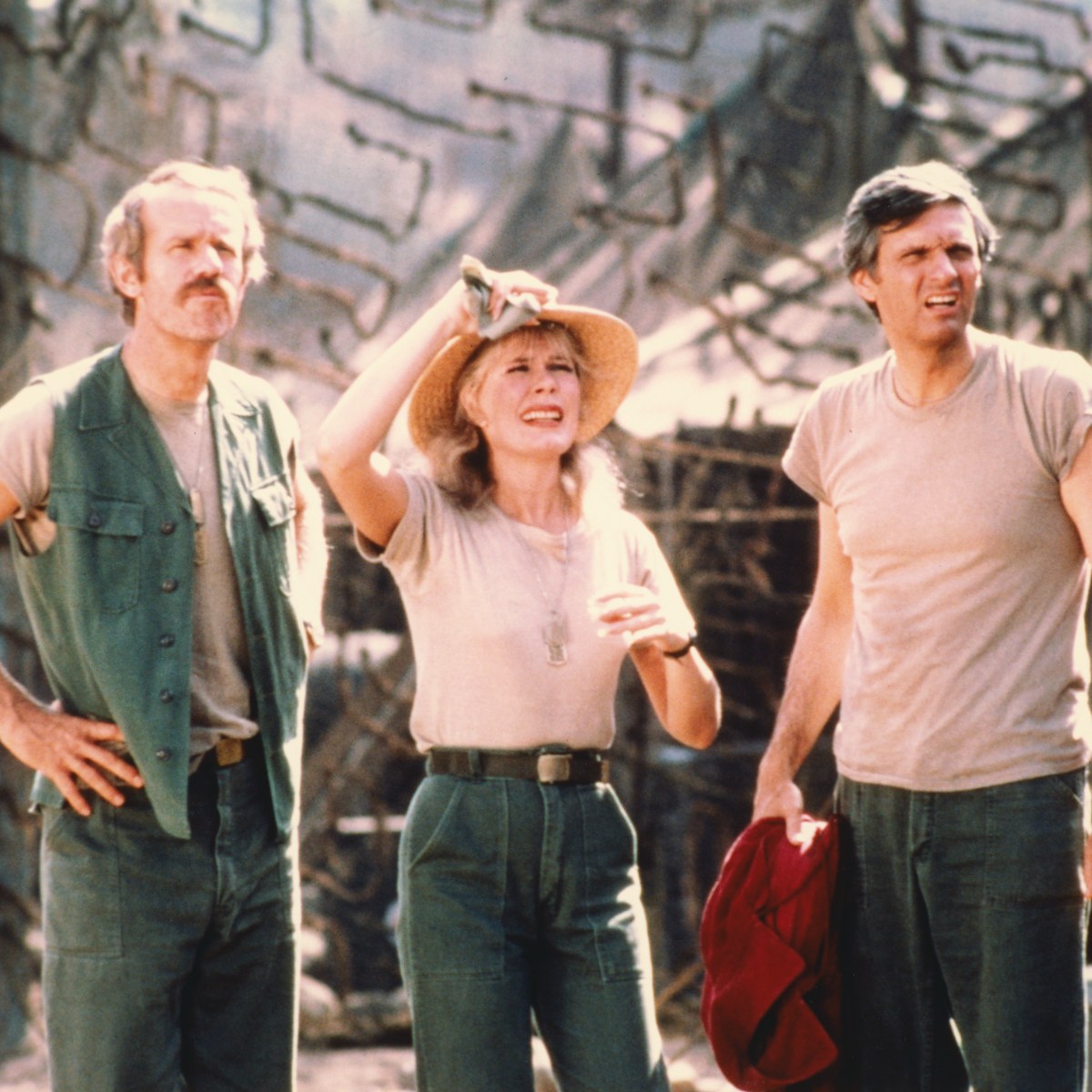 In the 1970s, the idea of movies spawning TV shows based on them was becoming more popular. Neil Simon’s The Odd Couple and Barefoot in the Park were based on films and Broadway shows of the same name, Planet of the Apes came from the beloved sc-fi film series, while the feature Alice Doesn’t Live Here Anymore spawned Alice. And then there was MASH, inspired by the 1970 film.  And let’s face it, the idea of a “sitcom” focusing on doctors stationed at the 4077th Mobile Army Surgical Hospital in Uijeongbu, South Korea didn’t exactly scream TV hit. But that’s exactly what it became. 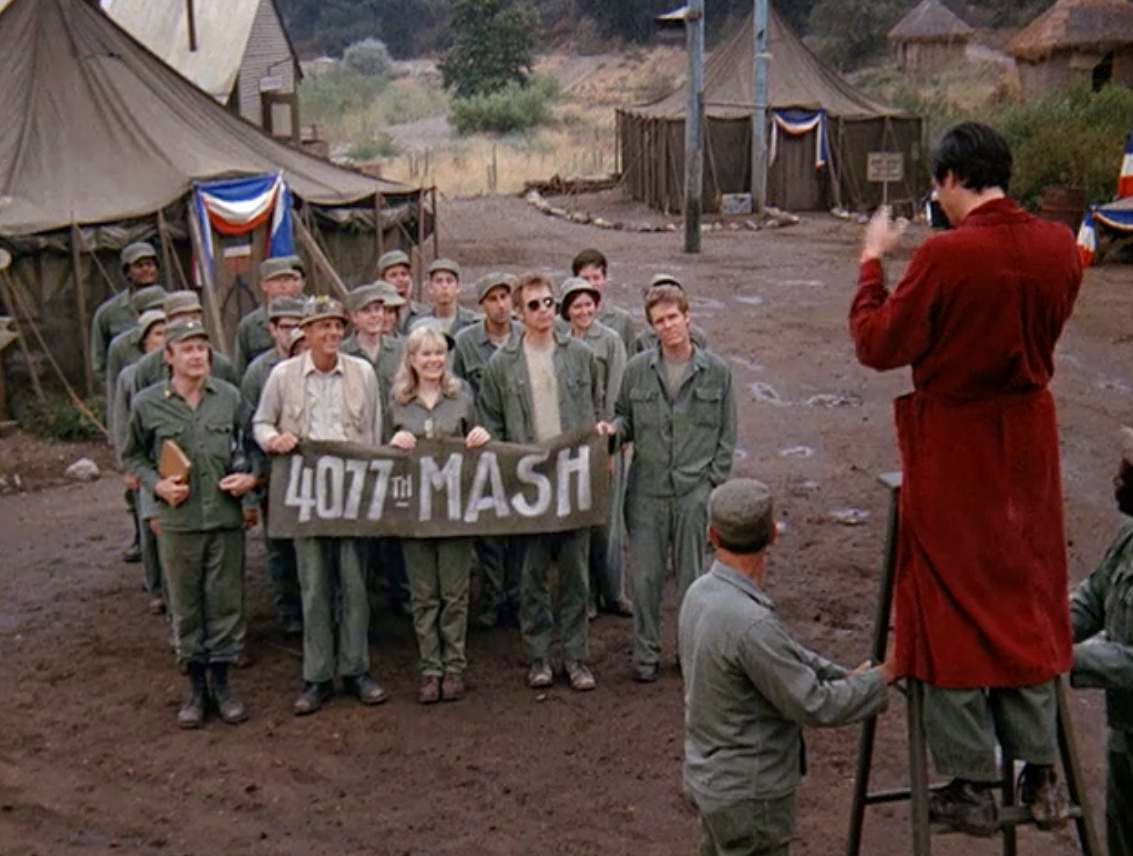 Part of a Classic TV Lineup

The show made its debut in 1972 on CBS, and (not surprisingly) struggled in the ratings. But in its second year it shifted time slots and that changed everything. In fact, it was a part of CBS’ (then) sterling Saturday line-up, which consisted of All in the Family at 8, MASH at 8:30, The Mary Tyler Moore Show at 9, The Bob Newhart Show at 9:30, and The Carol Burnett Show at 10. That was impressive in itself, but even more is that the show would run until 1983 and a total of 11 years (much longer than the Korean War was actually fought). Along the way it also introduced audiences to some of the most memorable characters ever presented on the small screen, many of whom will be discussed shortly.

Elements of the Film Carry Over to the Show

“I recently started rewatching some of the early episodes on Hulu,” explains Dale. “I can see where they were trying to make it look like the movie, even including a couple or characters from the movie that they eventually got rid of, because they couldn’t figure out what to do with them. And they definitely tried to make it look like the movie; 20th Century Fox kept the MASH set pretty much on their ranch, so they used the same setting.”

As to why the show lasted as long as it did — winning 14 Emmys (though being nominated for 100 of them in total) — along the way, he offers “I really think it had to do with the writing and acting more than anything else. I don’t think anybody was really wanting to just watch a show about surgeons in the Korean War for 11 years. It really had to do with people wanting to see a quality comedy show —or comedy drama show, as it went on to become.”

Another element that separated MASH from a lot of other shows, particularly from that time, is the fact that there were a lot of cast changes over the years. And we’re not just talking about actors playing small roles on the show, but some major players. And yet M*A*S*H not only survived, it positively thrived, each cast defection resulting in someone even stronger taking their place. We’re losing Henry Blake? Make way for Sherman Potter. Trapper John (or real-life alter ego Wayne Rogers) has had enough? Welcome, BJ Hunnicut. And it went on from there.

“This was the first show that could get rid of several members of the cast,” says Dale. “I mean, on most shows if you get rid of one, the series falls apart. This one had at least three major actors leave and it still went on for several years. I think it’s a good example of one of the few cases where they were able to do that and keep going.”

That likely wouldn’t have been the case, he muses, if Alan Alda had decided to leave. “Hawkeye really was the cornerstone of the whole thing,” he offers. “There were times where you felt it got preachy with him — I’ll admit that — but I don’t think it would have survived without him. He really was the beginning and end of the show, which is what you get in the final episode: The last thing you see in the episode is him. Truthfully, a lot of his own creative and political leanings came into the show, he also directed and wrote many of the episodes. He was that important to it.”

“Hawkeye was written as in the book and the film, which was that of a brilliant, wisecracking surgeon, and that is exactly what Alda gave us in the series at first,” Dale points out. “However, over time and through his influence as a writer and director, he was able to expand Hawkeye to show us a man obsessed with trying to save the world and finding that sometimes we must admit we’re human.  The creator of MASH, H. Richard Hornberger, would later denounce the series due to what had been done to his creation, specifically Hawkeye (who was a glamourized version of himself during the war), but it is Alda’s stamp on Hawkeye that we all remember today rather than the one from the novel or Donald Sutherland’s portrayal from the film.”

“At times,” Dale opines, “Trapper seemed to be regulated to that of Hawkeye’s audience, laughing at his jokes, rather than a major character in the show (something Rogers himself was quite aware). However, when given a chance to do something more, Rogers gave us a character that was not simply Hawkeye Jr., but a man who was more aware, and even more adult than Hawkeye. Further, while Hawkeye exhibited his anger through talk, Rogers exhibited a fiery edge to Trapper’s anger that could easily move to the physical. Mike Farrell as BJ would prove to be a fine replacement, but the buddy-buddy atmosphere of the first three season with Hawkeye and Trapper would be gone — to be replaced with one of a group interacting — and so, too, would be what some fans see as the show’s golden era.”

‘M*A*S*H’: A ‘CSI’ Star Once Made an Impactful Cameo on the Series

Harry Morgan had trouble finding the right personality for Col. Potter when he joined M*A*S*H